When All the Stars were Falling 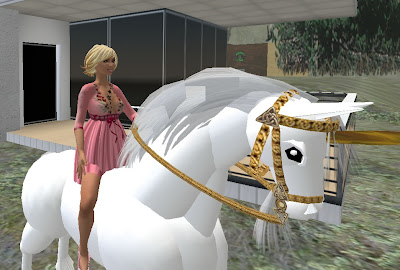 I received this lovely unicorn as a wedding present from my husband. :) I have named him Starlite, the most magnificent horse in the universe.

I admit it, I am a product of the 80's. I grew up with Rainbow Bright, Jem and the Holograms, My little Pony, Smurfs, and Sheera Princess of Power. Kids today don't know what they are missing. :) I decided to pay a tribute to one of my favorites, Rainbow Bright. She brings color and light to the darkest corners; she has an awesome pet horse named Starlite and has a love of stars. I actually loved Rainbow Bright so much as a kid. I remember watching the movie "Rainbow Bright and the Star Stealer" over and over again. I would pretend I was Rainbow Bright fighting Murky and Lurky's evil plans to rid the world of color. I even had a Rainbow Bright doll I carried everywhere I went. OK, enough reminiscing about my childhood. :) 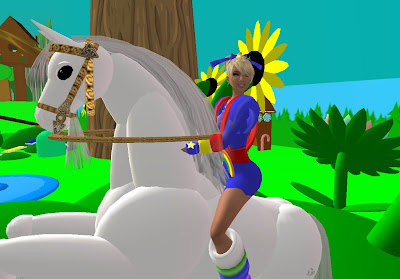 Today I visited this great cartoon sim, Aiot's Toon Wonderland. I had been searching for a cartoon sim for a couple of days now. I was quite surprised to have found such a fun little place. There is definitely more than what meets the eye here. When I first arrived I was greeted by Sim owner Aiot, he informed me that there was a set of caves and even a castle at the end of the tunnel. I knew at that moment that I had found what i was looking for. 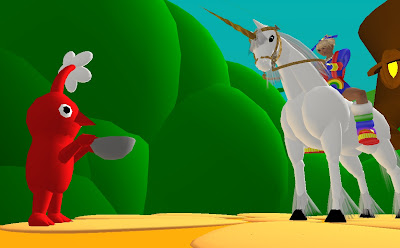 We were first stopped by this little Pickman, He asked us to help save his fellow friends from danger. They were forced to work in the mines for Murky and Lurky. I eagerly took up the challenge. Rainbow Bright is one fierce chick! 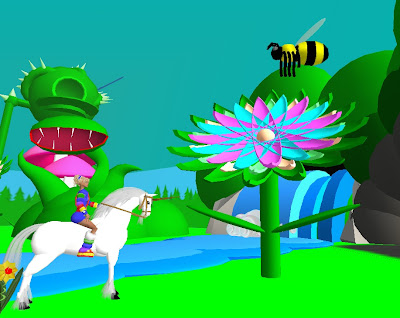 Ok Starlite, Easy boy that bee didn't mean you any harm.
We crossed the river in search of Murky's and Lurky's Evil lair. Starlite was a little scared of this bee after all I couldn't blame him he has been stung before. 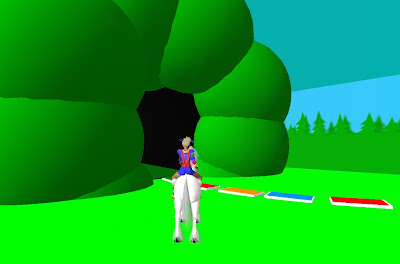 we entered the dark cave........ Ohhh Starlite, I'm a little frightened, I hope were ok. 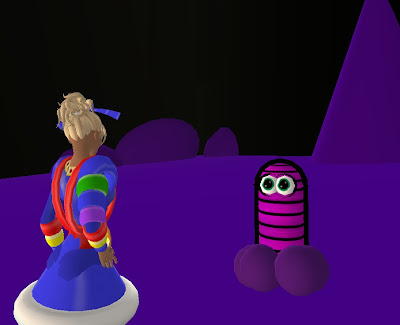 Hmmm, I think Freud would have a field day with this little guy, he just doesn't look right.

We meet a strange little guy who told us that the Pickman were digging up color crystals. Murky and Lurky were creating an evil potion and had made Pickman their zombies. 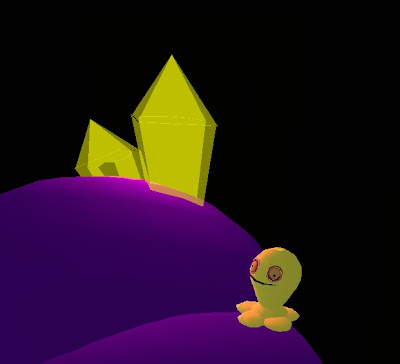 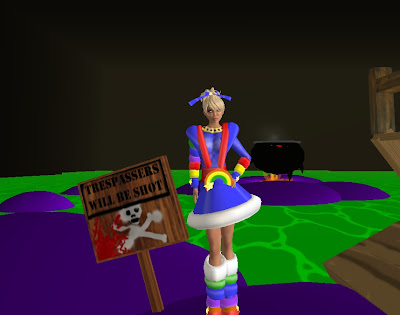 Trespassers will be shot!
We found their lair, and headed with caution. That huge pot must be where they are making the potion. 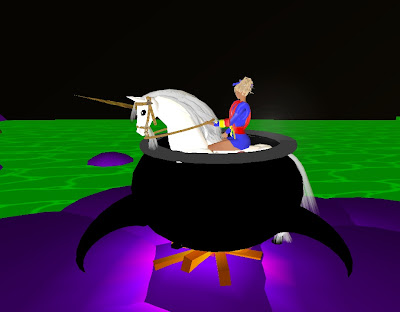 Caught! Oh no, Starlite and I were captured and placed into the water. Luckily I had my color belt (not only just a great fashion accessory). Starlite was able to knock over the potion and we were on our way, making our great escape. 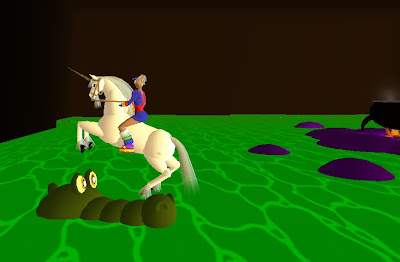 Our Escape!
Starlite knocked out this gator with one swift kick. 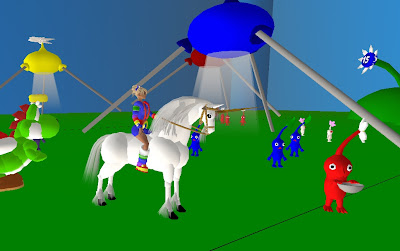 We saved the Pickman and restored color to their world.

Special Dedication to my KIKI, my little sister in RL who has decided to join SL, hope this brings back good memories for you too. Love you, your BS(lol) :)