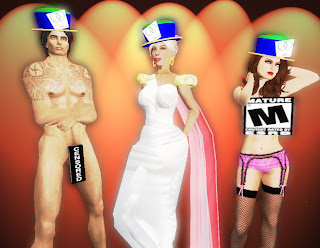 Mt, thePrincess, Bells
We landed nude (close to it) for the results of the election.
Saturday marked the end of elections at CDS for the new RA term. For those of you that don't know what CDS is here is link to one of the longest traditions in Second Life's history.(CDS Wiki that includes history) In short CDS is a collection of themed based Sims that carry on in a democratic society. (most of the time :) )

Now normally when elections end the results are posted within a couple of hours; however this time we had to wait until Sunday to get the results due to "unforeseen wrinkles". So what was the hiccup? yep you guessed it. Tabulating Votes. (Election results from CDS forums)

MT has now petitioned the SC to appeal the election results (petition to SC) to rerun the election after the method of voting has been fixed. (btw, NuCare has no rep. in the SC) The SC is has set up a meeting later this week to discuss the petition.(announcment of meeting)
However,now it seems now the petition MT requested has been linked to the NuCARE faction, and is "urged to be rejected" by the SC. (Notice of correspondence: regarding Lundquist Petition)

Looks like election reform should have been solved during last RA term, but was never.

My questions: If zero based borda was the standard in past elections why was it brought into question for this election? Why did we have to wait an additional day so the SC could decide how the votes would be tabulated? IMHO the results shouldn't have been an issue at all, perhaps my lack of experience and naive nature in this matter brings these questions to the surface. It just doesn't seem fair that two different outcomes can arise during an election and based off the vote or general concession of one group the results change to favor one party over another. I am quickly learning there are shades of Grey in politics, and CDS is no exception. As my friend Vots reminded "Politics too is a game of chess".

So now it seems I have won a seat on the RA, and am now leader of the NuCARE faction. exciting yes! but I do have sense of sadness in the way elections were handled especially considering Nucare lost one seat. It just doesn't seem right.

Theres some people
that you just cant trust
but some people talk way too much.
Take my advice, and Listen Up!
Dont be a fool like the rest of us.

One, two three, take it from me,
three, four, so much trouble in store
four, five, get it right, the first time
count it with me now!

The Gossip- Listen Up!
Posted by Bells Semyorka at 9:29 PM

There is no completely "fair" voting system, Bells...see Arrow's impossibility theorem for a discussion of why not.